Let me make a few things clear.
There is a perfectly logical emotional response to every situation. Have I always reacted appropriately? Of course not! There is a time to stand up and yell just there is a time to sit down and listen.
There is a time to fight and a time to walk away.
I had a preacher tell me once" Don't let idiots make you into an idiot". What he meant by that is never let someone else dictate your attitude.
Good advice! Much harder to do but I'm getting better!
Also, give your fellow human beings a benefit of doubt. Don't judge someone on what someone says about them. Judge them with your own eyes and ears.
One big question I get is what is the meaning of some of my lyrics. I can tell you that 90% of all of my work is about something that actually happened. The remaining 10% is because some words just sound cool together.
I try not to make the songs too obvious but sometimes there is no way around that. In the end, I just write what I feel and I hope you find your own personal connection to it. What you get out of it may be different than what I write about. That is OK! There is no wrong answer! I think you are all smart enough to figure it out and have your own personal connection.
I also get asked a lot about cover songs (even requests). Sorry folks but I am not that guy. Playing cover songs is very important to the development of any musician. I enjoy watching cover bands and I am glad someone does it. It's just not for me.
I'm not better than or cooler than a cover band. Just being myself!
Music is art to me. Just like a painting or a sculpture. I put some of it on display.
Some like it and others don't.
Although I appreciate anyone that pays money to see me or buys a cd, I don't try and write songs songs based on public opinion. I never even think about it. I write about what I am feeling at the time.
There are some people that are really good at writing a "Popular" song and I think that is awesome!
In the end, thats just not me. I have to look at myself in the mirror from time to time.
Posted by farris at 11:44 AM 3 comments:

How Download Cards work............
I sometimes think that the download cards I sell confuse people. For 10 I sell, only 7 people download the songs(I can see the report).

I like the download cards verses cd's. Most people either make a playlist for their ipod or make a mix cd with other artists and songs. Why have 300 cd's in your car when you only like 100 of those songs?

When you buy any product, you pay for packaging. Cds are expensive! That is why I charge $10 for them as opposed to $5 for the download card. You get the same music for half of the price! The difference is, you download the music to your computer first as opposed to ripping the tracks from a cd.

If you have ever downloaded a song from iTunes (or limewire if you enjoy stealing music), download cards are a similar concept.

Look at the back of the download card. Enter the web address into your browser(Internet explorer, firefox, safari, ect). Then enter the code and you will see the available tracks. Download them to your computer and enjoy!

Maybe it is because I have been sick for over a week but I am beat!

I found that a combination of Excedrin Migraine, B-12 tablets and Red Bull help me get through the day when i am ill.

When I am tired(and/or sick), I feel like that is the most honest I can be. I write many songs on the verge of complete exhaustion. That seems to help me be honest with myself.

Maybe that is why I am writing this blog. After a very long weekend and a long drive today, delirious is a better word.

I have been thinking about 1991 a lot lately. There was this band called Guns n Roses. They had changed the rock world 4 years prior. They were rough and honest but on September 17, 1991 they decided to release "Use your Illusion" 1 & 2.

Of course, GNR was Rock and Roll. They decided what was good and what was bad for us. Every record label from 1987-1991 signed every band that looked or sounded remotely like GNR.

The problem was, those bands were nothing but cheap imitations of the real thing.

The 1991 incarnation of GNR was a far cry from the 1987 version. Where they were all poor in 1987, in 1991 they were all millionaires. That change in social class was reflected in the "Use your Illusions".

In the first week of it's release, GNR had sold around 750,000 copies. Thats awesome, right?

The difference was, Geffen pressed a million copies of the GNR albums and less that 100,000 copies of "Nevermind" by that little unknown band called "Nirvana"

Also, "Nevermind" used a different reporting method than other labels used. They used this unknown company called "Soundscan" to keep track of their actual record sales. If you notice the bar code on the back of a cd, that number is registered with Soundscan.

When you see a cd in a record store, it is sold on consignment. The record companies(actually the artists) buy back unsold copies.

So before "Soundscan", record companies would pay "Kickbacks" to record stores to say they sold a ton of records from a particular artist. Many of which never left the factory or distributor and the unsold records would be charged back to the record company.

They would show that a certain artist sold 500,000 copies their first week when in actuality, they may have only sold 75,000.

The record companies would do that so that artist would chart high(Bilboard). The higher you chart, the more radio stations play your music. The more a radio station plays a song, the better the chance someone will go out and buy the album.

In 3 months, Nirvana made GNR and bands like them irrelevant. By January 1992, Nirvana knocked Michael Jackson off the top of the charts. That is HUGE!

Nirvana also made people want more music from their region. So people went out and found a band called Pearl Jam and their album "Ten", which was released 4 weeks before "Nevermind". The rest, as they say, is history.

On a side note, Jimmy Pasquill(the eldest brother of the Pasquills) introduced me to both "Ten" and "Nevermind" on the respective weeks they came out. I listened to both of those albums from start to finish in his Powder Blue 1974(i think) Mustang Fastback.

So why did I tell you all of that? The Excedrin Migraine, B-12 and Red Bull has run it's course and I am exhausted.

Bands like GNR, Winger, Warrant and Skid Row were on top the the world in 1991. One band basically killed them all. One album changed almost everyone's thought process, maybe even the world.

Trends that are hot today are the punchline of a joke tomorrow!

If you are a musician, be honest with yourself. Play the music you want to play.

What do dreams mean?

I have a reoccurring dream. I am in my old Chevy stepside(which is a 3 speed manual on the tree) and I have to go over a ridiculously steep bridge or overpass. If you can picture how steep a ladder is, you got the idea.

It is always a one lane road and by the time I see just how steep it is, I can not turn around. I keep climbing while almost having a panic attack. Wondering if the truck is going to make it up the hill or not.

The problem is, I never reach the top. I wake up before I get there.
I am not afraid of heights. I fly often and I enjoy it. That dream always disturbs me.

If you have any idea what that dream means, please email me at farris@chadfarris.com. You will have to confirm your email address(to keep the spammers away) but I am curious what your thoughts are.
Nite Nite!
Farris
Posted by farris at 9:46 PM No comments:

Posted by farris at 1:45 PM No comments:

I don't know how many of you have been to a Guitar Center. When you walk in, you hear at least 5 people playing guitar. And they are all playing different stuff, usually very painful to hear. It is way too loud and very seldom will you hear someone that can really play or afford the gear they are playing. Hey, one can only dream, right?

The last time I was there, I was trying to play "Hit Me Baby One More Time" while another guys was drowning me out with "Keep Your Hands To Yourself".... Not really, just a joke a few people will get! No harm, no foul!

Not a slam against Guitar Center but I really miss Mars Music. The gear was spread out and the buildings were at least 3 times the size of Guitar center. You literally could pick any instrument up and play it.

When I go to Guitar Center, I usually know exactly what I need. I always leave feeling like a sell out or something? I DON'T KNOW WHY! I never get that feeling using Musicians Friend(Who is owned by Guitar Center)!
Nite Nite!
Farris
Posted by farris at 8:28 PM No comments:

I posted this on myspace blog, so I am moving it here.

Greetings!
Just so you know, I only have a bit of creativity so I decided to number my blogs instead of giving them a cute title. Most anything you would want to ask me you can find on Blog #4.
Later Taters!
Farris
Posted by farris at 12:13 PM No comments: 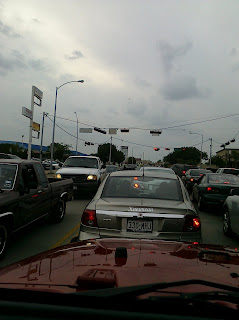